Harley Davidson and the Value Curve

Having always had a passion for freedom on the road, and being an admirer of Harley and Davidson, I thought there are few topics that could so elaborately explain the innovative cycle within the framework of the value curve as well as the Harley Davidson story.

Having recently arrived home in South Africa and been away for nearly 2 years away, I have really missed some of my conveniences, one of these being my own personal motorbike. Lets just say, its not a Harley Davidson but it does have features I rather do enjoy:
– decent power
– low’ish fuel consumption
– reliable brand and build quality
– reasonable on-road and off-road ability (reasonable)

The one feature I rather do dislike though is its ride height, which puts me on my tip toes at the traffic lights! At 5’10 I am not exactly short but this feature does unfortunately make the bike a less comfortable experience at times.  Later on I will explain a little more how product-customer preferences help shape a product’s Value Curve or Wave..

But first some history………..

In 1903, Harley and Arthur Davidson built the first motor. It was a dream concept Harley had blueprinted when he was only 21 about 2 years earlier. It features a 3-1/8-inch bore and a 3-1/2-inch stroke yielding a capacity of 7 cubic inches (116cm3). They completed building the bike with the help of Walter Davidson but realized the motor had insufficient power. Soon however thereafter they made a much more powerful motor at 24.7 cubic inches (405cm3) with the assistance of Ole Evinrude (better known as the inventor of the outboard motor). It was designed for motorcycle racing and as luck would have it, had them placing fourth in their first race.

By 1905, they were placing the first magazine in the Automobile and Cycle Journal offering engines to the do-it-yourself trade. And so that year, the legend was born with their first dealer selling all of 3 full motorbikes!! Ok, ok they were getting there.. 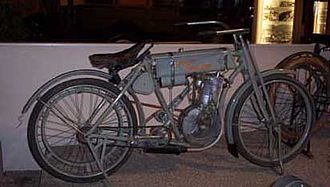 The year after, the brothers built their first factory and scaled the production to 50 motorbikes. The company had grown to have six employees. It produces its first catalog, and coins the nickname “Silent Gray Fellows.” It’s a reference to the fact that the bikes were painted dove gray, and that they were quietly reliable. (Evidently, the company’s founders were unaware that loud pipes save lives.) By the 1907, Harley had already innovated his motor design further and built the first 45 degree V twin motor generating double the power (not shown in the picture above but more clearly seen in the one below).

During these days, one must remember, the motorbikes still resembled bicycles and fit into the then technological paradigm of bicycles with motors. There were definite conveniences with the bike being lighter than many of today’s bikes but had none the safety features today like dual brakes, speed indicator and lights to help you in the dark!

By 1914,  Harley Davidson was producing 16000 machines and starting to pull ahead of its major competitor, Indian. 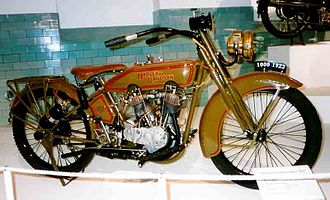 The World War also helped with the US army taking delivery of 20000 motorbikes. By 1920, Harley Davidson was the largest manufacturer in the world with dealers in 67 countries.

From there, the company grew and declined numerous time to become the well known brand we know today. Of particular interest to Harley’s strategy was to always provide good support for all its parts and components. Especially in the World War’s where Harley volunteered to train support personnel so as to ensure further brand loyalty. 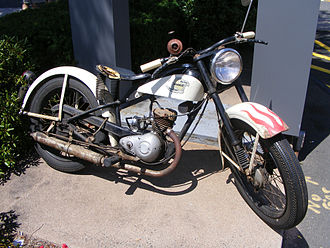 ed on a product, but on mechanic support, social support and a network of bikers all over the world. The company also understood that to their customers, freedom of choice was very important and probably explains why the brand is so ingrained into America’s culture.

Building a brand is subject to the values it provides to its customers. Can we be more scientific about these values?

Well perhaps, taking some of the concepts of blue ocean methodology, understanding the value curve for your customers and their contexts, one can look at our customers in new ways. Figuring out the their root motivations and concerns. Below I have compiled a value analysis of GS650 and a Harley Davidson. 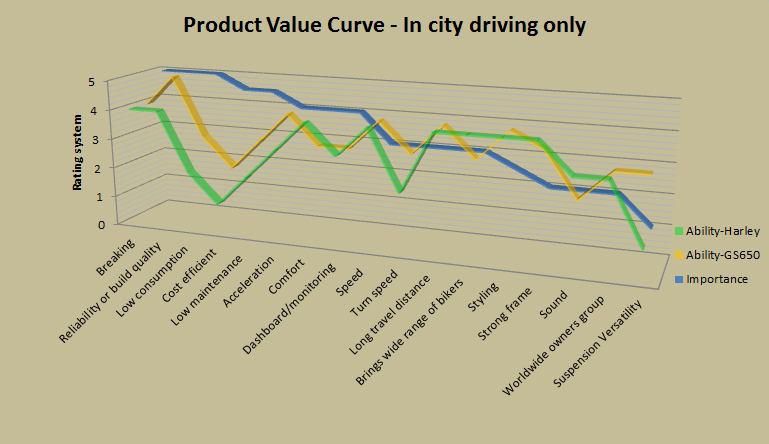 Compiling an analysis of whats important to a customer will give you their value curve.

Although my ratings above are rather subjective, some interesting insights can arise. For example both the Harley and GS650 rate rather badly on on fuel consumption, cost efficiency and maintenance. Other areas these bikes actually exceed the requirements of in city driving. Of course parameters like speed could be argued in some cities due to the need to use freeways by some customers. But what such an analysis can do is to analyse your customer values curves, aggregate them and help or assist a business provide value where competitors may have missed the proverbial boat. Anyway, some food for thought! I think I need to go for a ride. 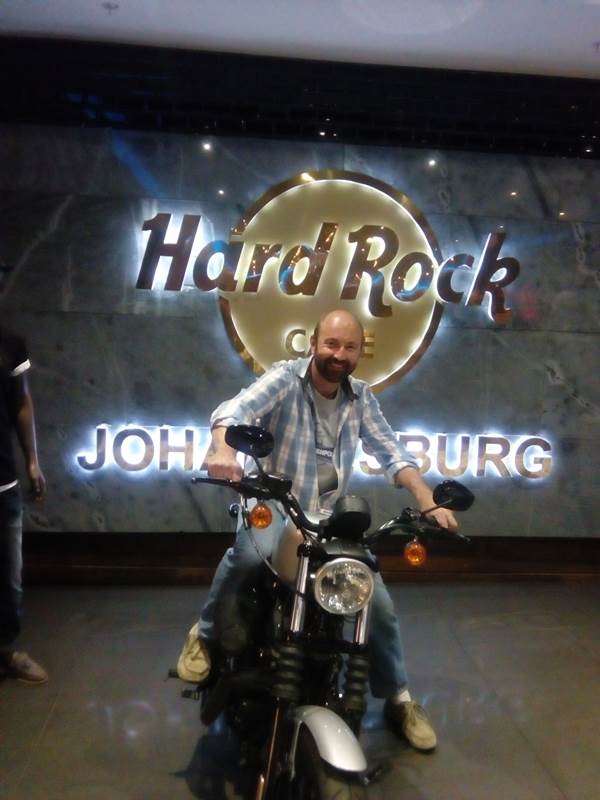 Manage what motivates you. We help drive your innovative engine.